Near Morocco’s sunny Atlantic coast, the tiny community of Id Mjahdi is being touted as Africa’s first completely solar-powered village.Solar power has the potential to become one of Africa’s top energy sources, according to the International Energy Agency, but more infrastructure needs to be installed — of all solar power in use globally, less than 1% currently comes from the continent.Morocco is leading efforts to fulfill that potential. It already meets 35 percent of its electricity needs from renewables and aims to increase its use of renewable energy to 52 percent by 2030, according to the International Renewable Energy Agency (IRENA).

The country already has the world’s largest solar farm, the Noor-Ouarzazate complex. Now, Id Mjahdi, on the outskirts of the city of Essaouira, is being pitched as a blueprint for how to power remote villages that would be expensive to connect to the national electricity grid.

While many other African villages use solar power to some extent, Id Mjahdi uses it for all its energy needs.

When Moroccan solar power company Cleanergy came up with the idea of testing a sustainable model for electrifying remote communities, it looked for a village “where they need everything,” according to the company’s founder, Mohamed Lasry.Before the scheme began, villagers relied on candles for light, and they typically could afford only around an hour of candlelight for working or studying in the evenings. They would burn tree bark for heating and cooking, which was bad for their health, says Lasry.

Id Mjahdi did not even have a nearby source of water, and girls in particular often missed school days to walk several miles to a well, says Lasry.The first step in the $188,000 project was to build a water tower for the community. The next stage was to install a power station with 32 solar photovoltaic panels, which generate 8.32 kilowatts of electricity for distribution via a mini-grid.The power station is connected to around 20 homes in the village, serving more than 50 people. Each house was provided with a fridge, water heater, television, oven and an outlet to charge devices. The solar network has a battery that can supply up to five hours of electricity outside daylight hours. 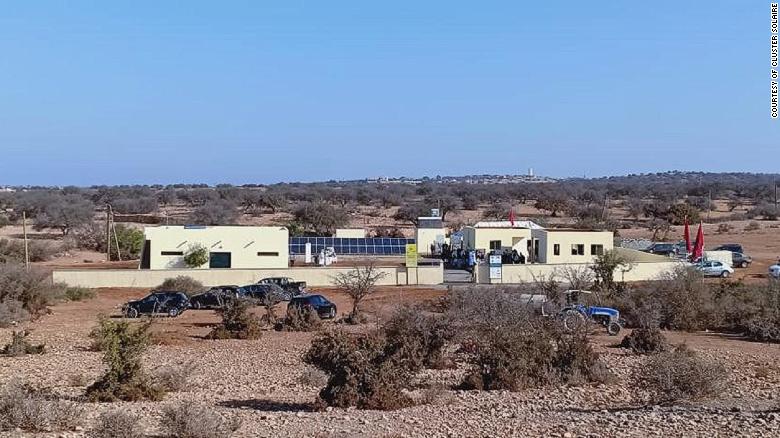 Around 20 homes are connected to the solar grid.

The project was also assisted by Cluster Solaire, a Moroccan non-profit that supports green-tech companies, which enlisted financial help from the Moroccan Agency for Sustainable Energy and French businesses Intermarché and Petit Olivier.In October, Cleanergy unveiled several solar-powered buildings — a hammam (public baths), a workshop where women study and produce argan oil, and a preschool for children between the ages of three to six, which enables their mothers to workWhile the children play and draw, 30 women — many of whom did not go to school as children — learn reading and writing, train for scholarships, and use traditional techniques to create argan oil, crushing kernels from local argan trees. Cosmetics company Petit Olivier buys all the argan oil the women produce, giving them an income.”People that were not working at all and not having any sustainable revenue, the fact that they are working in their village and creating value is very important and very, very valuable,” says Fatima El Khalifa, from Cluster Solaire, who is giving a presentation on the project at the COP25 climate summit in Madrid this week. “We created an association like a cooperative at the village and they own the whole production.”The association takes a small fee from the argan oil sales to maintain the solar network, and men and women in the village were trained by Cleanergy in how to manage it. 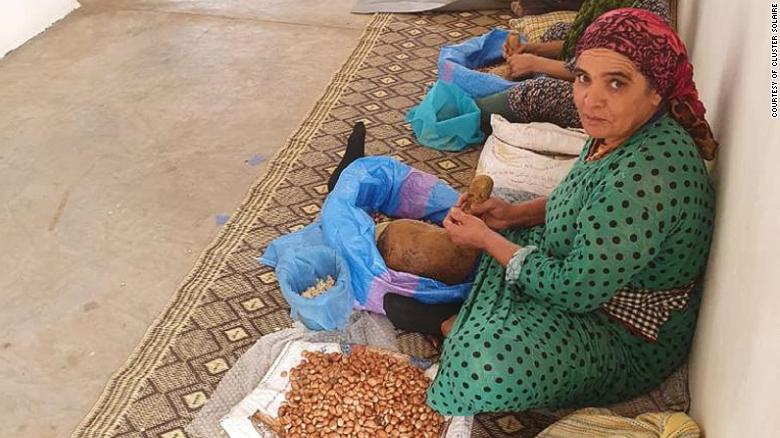 Lasry says the mini-grid is simple to replicate for villages of 100 to 1,000 people, and it is sustainable, because locals can maintain it themselves. “It is possible to duplicate anywhere in the world,” he says. “It is not a complex system, it is easy to do, it is robust.”Cluster Solaire is now seeking funding to build more solar villages. El Khalifa says there are 800 villages without electricity in Morocco alone and the World Bank estimates that 840 million people lack access to electricity worldwide.

Around 650 million people will still lack access to electricity in 2030, nine out of 10 of them in sub-Saharan Africa, according to the World Bank. It says mini-grids could be the most cost-effective solution for remote areas with a high enough demand, and could provide electricity for 500 million people by 2030.

“Our plan is to show [Id Mjahdi] as an example,” says Lasry. “People change — they have more time, they can have money, they can go to the market, they can buy what they need.”For deprived communities seeking economic stability that won’t hurt the environment, this solar village shines bright.

Techknow Africa (Network) is an Online Tech publication that works on promoting African Technology innovations and inventions globally. Together we are creating a global Network of Africans In Tech and Technology related domains.

krainians have often pioneered market-leading companies and built products that...

he software factory is expected to create job opportunities...